A few months ago, in October 2019 more precisely, we were learning thanks to a study conducted by Statista that range Amazon Echo now dominated the connected speakers market in France with 49% of share ahead of Google and its 38%. But the domination ofAmazon, with Alexa leader by far, is even truer across the Atlantic as revealed by a new study published by eMarketer. And, apparently, that is not about to change as the domination of the e-commerce giant is expected to be unchallenged for at least another two years.

Indeed, 69.7% of American smart speaker users have one or more Amazon Echo and only 31.7% own a Google Home. A slight drop of 0.8% compared to 72.9% last year, which can be explained by the arrival of new players on the market (+ 0.4%) and a slight increase in Google, which gained 0.6%. However, we must add to the speakers Alexa the Sonos or Harman-Kardon brands who help develop the voice assistant ofAmazon.

[…] American users of connected speakers would be 69.7% to own one or more Echo […]The Alexians

eMarketer raises which "AlthoughAmazon was not the first to market a voice assistant, it had a leading edge in smart speakers with its US introduction of the Echo and the built-in voice assistant Alexa at the end of 2014. Since then it has regularly released new features that make the speaker easier and more intuitive to use ”.

And if Amazon was a little afraid of being overtaken by Google for a while, its much more aggressive business strategy and e-commerce platform are clearly working in its favor. It must be said that, where Google presents only a few shy new features each year, the Seattle firm is flooding us with new products in its Echo range every year. In 2019, we were able to discover many new features Alexa, foremost among which are the high-end Echo Studio speaker and Echo Buds in-ear headphones in partnership with Bose. The offer ofAmazon therefore has nothing to envy that of its competitors and this is clearly reflected in the performance of sales of devices with Alexa integrated.

All his figures are also the sign of a great vitality in the connected speakers sector and their strong development. Another study, published by Canalys last year, predicted that their number could approach 600 million units in 2023, dethroning the shelves in 2021 and becoming in fact one of the most popular high-tech products.

The number of connected speakers could approach 600 million units in 2023, dethroning tablets from 2021 and becoming one of the most popular high-tech products. The Alexians

Up 13.7% over one year, the American market is no longer the first to grow because the penetration rate of " smart speakers ”is much more important there than in the rest of the world, and in particular in France where only 7% of French internet users are equipped with a connected speaker equipped with a voice assistant in 2019, when they are already more than 25% in the United States. There is therefore a good margin to Alexa to continue its growth ... Because yes, Alexa leader, that sounds really good! 🙂 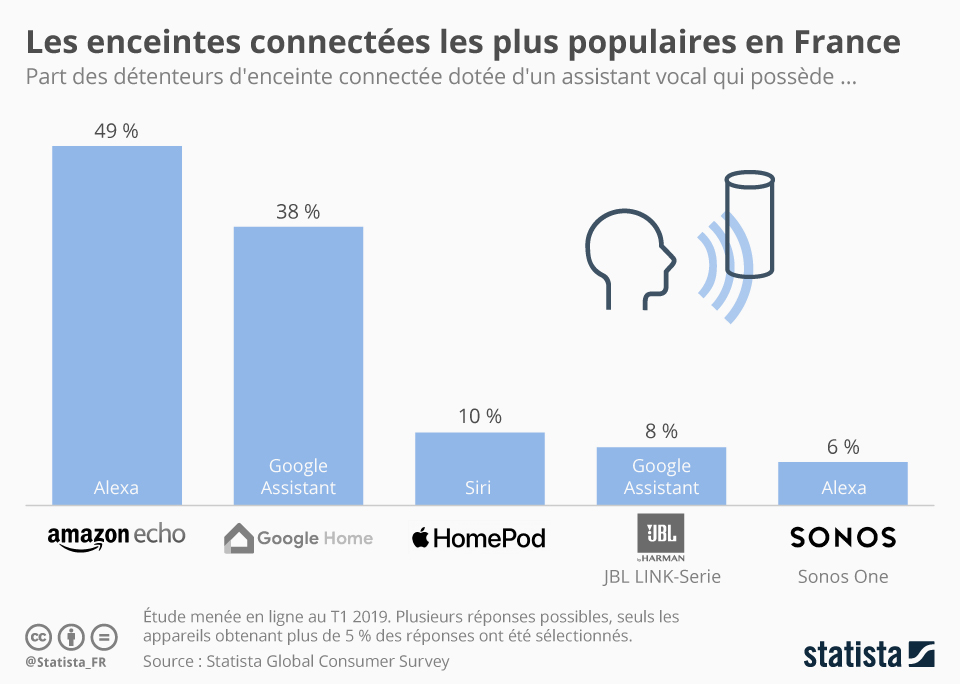 Tags Alexa Echo Amazon Alexa Amazon Echo Voice assistants Connected speakers
Alexien Modo February 12 2020
Alexien Modo
See more
Fascinated by Alexa since the day I received it in beta test, I gradually became passionate about the subject, before deciding to go further by creating a site with Jean-Christophe. An activity that allows me to quench my thirst for new technologies and share my discoveries about the nicest of communities: Les Alexiens.