After the voiced by Melissa McCarthy and Shaquille O'Neal, here isAmazon offers a surprising Echo Studio limited edition featuring Billie Eilish… Available for pre-order in the United States, this variation is a great first for the most upscale speaker Alexa.

It is on his blog thatAmazon just announced her collaboration with the singer and songwriter Billie Eilish in order to offer a unique limited edition of its Echo Studio. Sporting the cover of his latest album, " Happy Than Ever", The most upscale loudspeakers Alexa is adorned with a beige fabric and the singer's face.

Indeed, Echo Studio is equipped with a 24-bit DAC and a power amplifier with a 100 kHz bandwidth capable of delivering a high resolution, lossless music. HD music, and sometimes even 3D, thatAmazon now offers all its subscribers Music Unlimited Without supplements. If you are not already a subscriber, you will also be able to benefit from six months of free subscription with the purchase of this limited edition which may well become collector quickly!

obviously, Amazon did not fail to learn a few things about the singer and the happy owners will be able to ask: 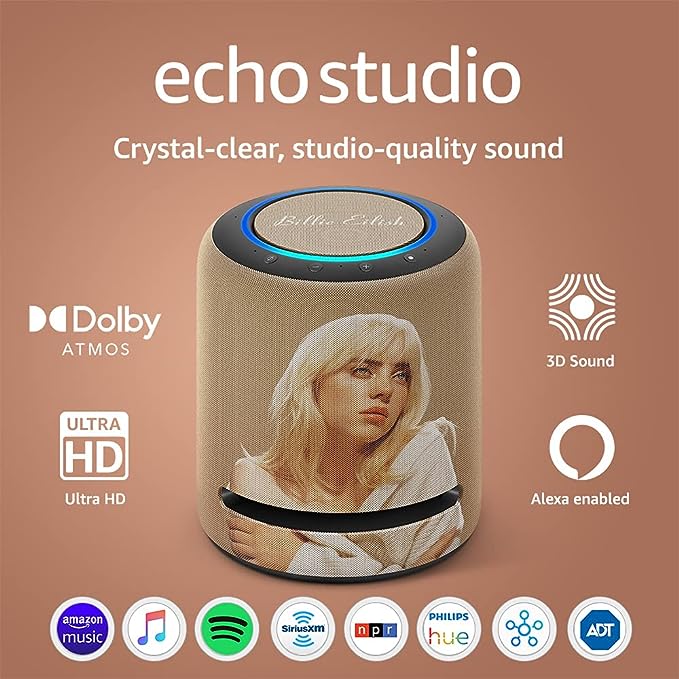 As you may have noticed, the loudspeaker is not available in Europe… But you can still take advantage of great prices on the loudspeakers. Amazon Echo !

TO READ :
Amazon sell off its Echo speakers and Fire TV devices

Pre-order the limited edition Billie Eilish Echo Studio smart speaker with 3D audio and @Alexa99 while supplies last. Listen to “Happier Than Ever” with a 6-month subscription of @AmazonMusic Unlimited included. https://t.co/FJ2wlfQEbo pic.twitter.com/OFwsM9PDhe

Tags Amazon Alexa Echo Studio Echo Studio Billie Eilish Limited Edition
Alexien Modo September 22, 2021
Alexien Modo
More
Fascinated by Alexa since the day I received it in beta test, I gradually became passionate about the subject, before deciding to go further by creating a site with Jean-Christophe. An activity that allows me to quench my thirst for new technologies and share my discoveries about the nicest of communities: Les Alexiens.