Facebook group
Also find our complete test and our opinion on the Fire TV Stick 4K with its remote control Alexa.

And one more device in the range Amazon that works with Alexa! After long months of waiting, here comes the famous Fire TV Stick 4k and voice remote control Alexa. Excellent news for the Alexians who will be sure to test it as soon as it is delivered to them. In the meantime, let's take a closer look at the data sheets and let's study together what this new model and its long-awaited remote control brings us. 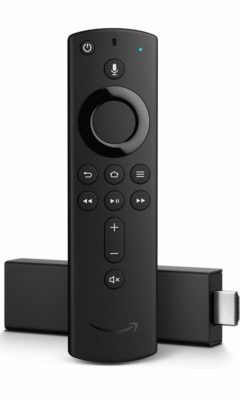 At first glance, nothing differentiates the brand new Amazon Fire TV Stick 4K du Fire TV Stick Basic Edition that we recently tested for you, except that he is happy to smile at us without showing the brand Amazon in herself. In reality it is slightly larger, since it measures 108 mm x 30 mm x 14 mm, HDMI connector included, and weighs 53.6 grams (against 32 g). It is therefore under the hood that the difference will be most visible.

What about its technical sheet? 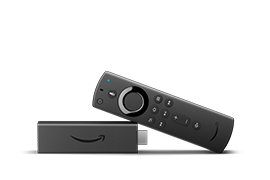 Well it seemsAmazon clearly doped him like a Russian athlete in order to win him the gold medal of the best tv dongle of the market!

Now equipped with a Quad Core 1.7GHz, An IMG GE8300 and 1.5GB DDR4 GPU, it now displays your 1080p stream, but also your 4K content! With two Wi-Fi antennas, the new fire tv hooks the signal better and will appreciate that you connect it in 5GHz. To finish, it runs under Fire OS 6, or a home version of Android 7.1.

It even seems that it would be more fluid and pleasant to use that Fire TV Cube which, too, is eyeing us, and which we always hope to see land quickly in France. It must be said that its compatibility with most audio / video equipment is a major difficulty for Amazon.

For the more picky, here are its full technical characteristics:

Fire TV and Alexa : a voice remote control to control the voice assistant

Good news, the remote control of this new Fire TV Stick 4K is clearly more successful. Still black, she presents five new buttons (volume +, volume -, mute, on / off and a voice button), as well asa microphone and a small LED. It is not much bigger, but clearly more complete and pleasant to use. And, the good news is that she is compatible with the Fire TV Stick Basic Edition. You can even buy remote Alexa alone  to equip your current Stick. It measures 38 mm x 142 mm x 16 mm for only 43.4 grams. Unlike the previous model, it works in both infrared and Bluetooth.

Obviously, its big plus is of course the voice control with Alexa. You can now use your compatible televisions, soundbars and receivers with the power, volume and mute buttons. Just tap and talk to easily find, launch and control movies and TV shows. This clearly makes all the difference for the Alexiens!

The product just announced by Amazon, we have obviously not yet been able to test it, but we will not fail to dissect it from every angle as soon as it arrives in our cottages! Anyway, this new opus from Amazon Fire TV Stick is more than ever attractive and promising for those who want to easily control their televisions with Alexa.
Le Fire TV Stick 4K will be sold for 59.99 € and remote control Alexa only at 29.99 € at the end of the launch period.
Cherry on the cake, customers Amazon benefit from discounts of up to -50% for the launch, allowing them to obtain the Fire TV 4K at 44.99 € instead of 59.99 € or -25% and remote control Alexa only at 14.99 € instead of 29.99 € or -50%.
Finally find our complete test and our opinion on the Fire TV Stick 4K with its remote control Alexa realized after this article.

Tags Amazon Alexa Fire TV FireTV 4K Fire TV Cube streaming
Alexien Modo September 4, 2019
Alexien Modo
More
Fascinated by Alexa since the day I received it in beta test, I gradually became passionate about the subject, before deciding to go further by creating a site with Jean-Christophe. An activity that allows me to quench my thirst for new technologies and share my discoveries about the nicest of communities: Les Alexiens.