We presented to you yesterday one of the ZigBee GLEDOPTO starter kits. This brand was originally specialized in the manufacture of standard LEDs, then became an expert in RF remote-controlled LEDs since 2010. In 2017, it successfully switched to ZigBee, but it did not leave behind its know-how and its protocol in Radio Frequency so far, because all their ZigBee bulbs are also controllable with their RF remote control. Today, this Shenzhen company is going further by allowing you to control bulbs initially operating with its RF protocol using ZigBee thanks to one of its new features: the GLEDOPTO USB ZigBee RF stick.

GLEDOPTO USB ZigBee RF 2.4G: what is it for and how?

Le GLEDOPTO USB ZigBee RF bridge of GLEDOPTO will allow you to control your lights operating in Radio Frequency 2.4 Ghz such as spotlights, bulbs, LED strips ... thanks to a ZigBee Hub such as Philips HUE, Lightify, Amazon Echo Studio, Show 2 or Plus as well as other ZigBee gateways. Please note, it is not yet compatible with the Ikea Trådfi bridge.

Of course, your lights will remain controllable by wall switches, but also by their original RF remote control. However, the restrictions inherent in the original products will still apply, which makes sense. If your bulb is not dimmable, you will not be able to vary the intensity for example.

You can connect a unlimited number of luminaires on a USB stick, but they will be considered as a single group. You can of course also connect a single LED to it, but in this case, that will be all. There is in fact only one "line" of communication. If you want to control more than one separately, other USB sticks will be needed. You can associate 50 USB bridges per ZigBee Hub.

The other advantage of the system is that it will allow you to set up a mesh system. Thus, you will be able to light any group or LED wherever you are because each RF device will act as a relay. Note, also, that controlling your Gledopto RF devices using a ZigBee protocol will make you simpler and allow you to do everything control with one app.

Be careful, however, to know the RF protocol used by your RF2.4G elements already in your possession. Operation is not guaranteed with GLEDOPTO products, of course, but also with brands MiLight / MiBoxer for references currently on sale. For other brands, there is no guarantee because the manufacturers keep their protocol secret most of the time.

Type of control
2.4G WiFi WLAN zigbee ZLL and 3.0
Voltage
5 Volts
Weight
12 grams
Width
25 mm
Length
82,5 mm
Thickness
10 mm
This ZigBee gateway USB stick is therefore a small tool that will provide a proud service to home automation precursors who have invested in RF devices and want to give a facelift to their installation and how to use it. You can also come and integrate it into systems Home Assistant home automation ou Jeedom.
GLEDOPTO ZigBee RF Bridge for 2.4G like Mi-Light / MiBoxer or GLEDOPTO to use with Hue, Echo ... 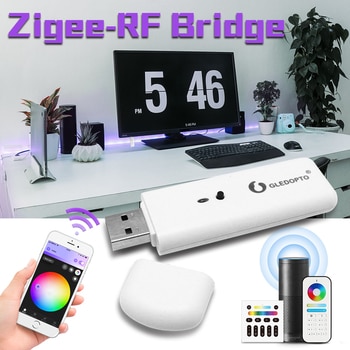 Tags Gateway ZigBee RF GLEDOPT 2.4 GHz RF Zigbee
Jean-Christophe May 3th
Jean-Christophe
More
Did i choose Alexa or did she choose me? Let's say that as a beta tester, it's a bit of both! And I do not regret having met our favorite assistant nor this adventure undertaken with Alexien Modo. Technophile, self-taught and loving popularization, I try to make our common passion easy to access!