Today the drafting of Numeramous ™ will present to you a smart speaker that we have found exceptional in every way. While brands like Google and Amazon are in the field of low-end speakers for pécores, Apple has released the ultimate, the Apple HomePod.

We will all agree that this speaker is beautiful, very beautiful. Its shape small sausage cylinder is a marvel of design and technology, that goes without saying (we'll get to that later). Pure beauty.

The structure of this fabric enclosure is fabulous. It is found in ivory white or intense black.

For connoisseurs (therefore us), here are the references:

The absorbance of light rays in the infrared is quite lowwhich means your HomePod won't heat up if you leave it in direct sunlight. They have thought of everything!

On this sublime object is a washer in quality plastic, with a - and a +, working by touch. It's simple, it's classy. It will light up when Siri wows us.

Regarding the other characteristics, the Homepod is delivered alone. You will need to purchase the optional power cable which is mandatory. This can be a shame but when you know that it is a different connection than other Apple products, it increases the price of the product and makes it a little less accessible. This choice, which seems questionable at first glance, is ultimately very sensible.

While Amazon had to release an Echo Plus to achieve a sound without singularity and that Google does not broadcast but spits sound, Apple has given us a gem! It is not sound but a poem, a spell. What can this be due to? First of all, the choice of materials and the fabric in particular.

As you know, we are not looking at the expense to give you a worthy test, so we sent tissue samples to a specialist lab which found two things:

We then analyzed the entire sound frequency of the HomePod and here is the result: impressive !

So we brought up  to Apple for an update of the microphones via an upgrading reboot by plugging into 7 Ghz Wi-Fi. And that's much better!

We were able to see that the range of sound frequencies went well below 20Hz, therefore infrasound, and above 20000 Hz, therefore ultrasound.

Which means that in the right place, your HomePod can also scare away neighborhood dogs and moles. It's ingenious!

We did not dare to open our HomePod received in Beta test for fear of not being able to continue it. But we were able to find the specs on the net and look at all the gadgets therein! Lots of microphones (6) and speakers (7) plus a subwoofer and an Apple processor. With that, normal that it weighs heavy and that it sends heavy. Apple is pretty secretive about the outright specifics, but it's necessarily well beyond yoghurt pots and home string Amazon. The big advantage is that the speaker will act like a headphone with negative noise, that is to say adjust the sound according to the quality of the reverberation in the room. No one does it except them. It's a technical feat and after listening to Tata Yoyo, the editorial staff can tell you that the sound quality is unimaginable! Bose, Sonos, Devialet and others should change jobs in front of this nugget, they are so far from it. 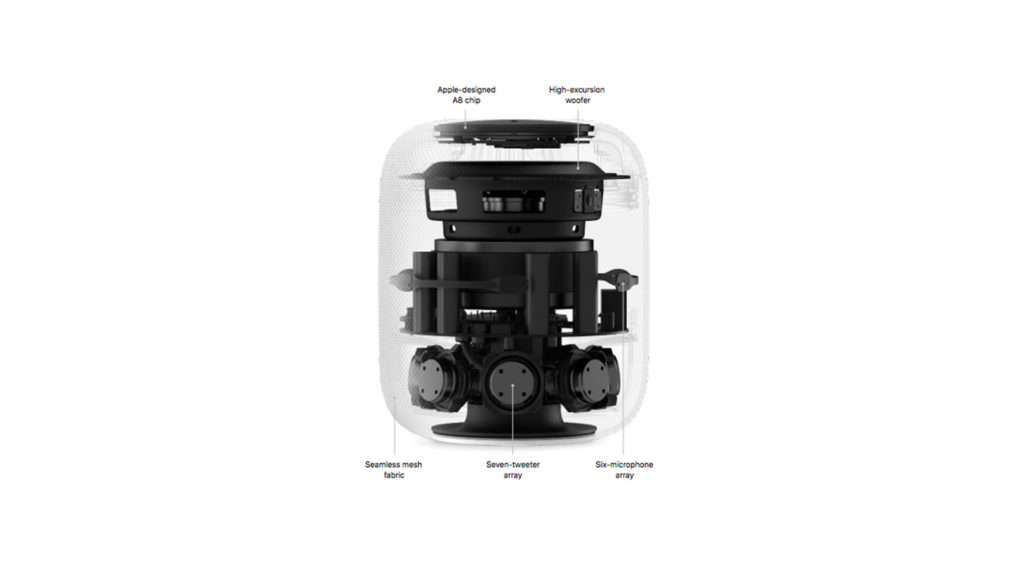 Cloud level, again, Apple is way ahead of its competitors who have only one server to handle requests. There, you will benefit from the network deployed for several years by the brand.
For commissioning, plug in the power cord (optional) and it is not more difficult.

With this HomePod, you can listen to your Apple Music, communicate with Siri, restore sound from your Apple TV, control connected objects working with Apple HomeKit, send messages to your friends on their Iphone ...

We have carried out fairly representative tests, the results of which speak for themselves. We asked him trivial questions and Siri did not respond. Proof of his wisdom. We asked him about the policy and he did not respond, proof of his fairness. We asked him intellectual questions and he did not answer, proof of his empathy. Once we realized that we had forgotten to set it to Wi-Fi (allow only two short hours), we decided not to try this futile experience of comparing it with other AIs again because we know that Siri exceeds them. no problem (Alexa which registers us and Google which does not know how to do home automation).

In conclusion, we are spellbound by this HomePod. The only downside could be the price, which we find a bit low. It is 349 € which does not seem divisive enough to us and we are afraid of seeing the same user population develop as on Google Home and Amazon Alexa. You only have to see the Alexians who are not able to write a serious article ...

Tags Apple Apple HomePod HomePod Humor Numeramous
Jean-Christophe December 28, 2018
Jean-Christophe
More
Did i choose Alexa or did she choose me? Let's say that as a beta tester, it's a bit of both! And I do not regret having met our favorite assistant nor this adventure undertaken with Alexien Modo. Technophile, self-taught and loving popularization, I try to make our common passion easy to access!