Those who have already tasted the joys of Ambilight on Philips televisions, or its equivalent with Hue Sync, know: immersing in a film, series or video game with a Philips Hue light system is an experience. more than joking. Unfortunately, unless you opt for a Philips Ambilight TV or to go through the mirroring of a PC, no salvation! To our delight, the Dutch brand has however just announced a real solution: the Philips Hue Play HDMI Sync Box.

This new system, which looks like an HDMI switch, presents 4 entries et an HDMI output in a black box a priori rather compact. Supporting the 4K HDR (also pass-through), it will synchronize up to ten light devices of the Philips Hue range with the image of any TV.

Obviously, you will need to purchase a Philips Hue White & Color starter kit, or at least one Philips Hue bridge for the magic to work, but you don't necessarily have to have an Ambilight screen and that, it must be admitted that it is more than appreciable, especially since DreamScreen threw in the towel and ceased to market its system.

Philips launched its LED lights for entertainment a little over a year ago called Hue play. An ingenious system but which seemed more or less reserved for a PC “setup”, today it is so unnatural to walk around with a laptop PC to enjoy the system on a television. From now on, we will be able to install them on the back of our TVs, fix Philips Hue White & Color LED strips or alternatively Sign light fixtures.

The system, tested by the American site Techhive.com, seems convincing according to the journalist who was lucky enough to be able to approach this news Hue Play HDMI Sync Box. Very responsive, unlike the Philips Hue experience on the MyCanal application of a Fire TV Stick 4K for example, the immersion here is total and conforms to what we can already experience on the Ambilight.

In short, the lighting specialist democratizes their system by offering an Ambilight to everyone. Obviously, as always with Philips, this has a blow and not the least, since it will be necessary to pay almost 250 €.

Available from October 15 across the Atlantic,th case Philips Hue Play HDMI Sync Box will be marketed in France at first quarter 2020 at a price of 249,95 euros.. 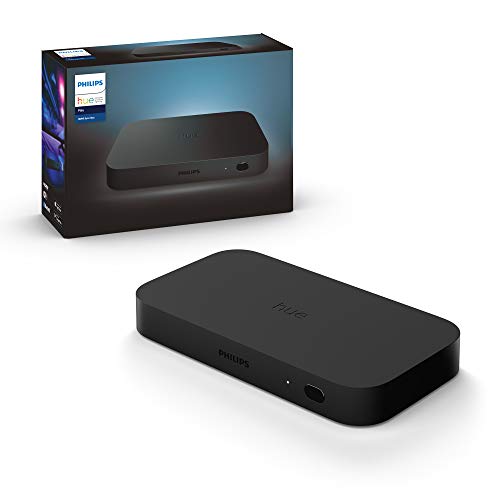 Tags Hue play Hue Sync Philips Ambilight Philips Hue
Alexien Modo September 17, 2019
Alexien Modo
See more
Fascinated by Alexa since the day I received it in beta test, I gradually became passionate about the subject, before deciding to go further by creating a site with Jean-Christophe. An activity that allows me to quench my thirst for new technologies and share my discoveries about the nicest of communities: Les Alexiens.