It is a product that is definitely on the rise: the streaming key. It may seem quite surprising when the Smart TV have become the norm, but not everyone changes their television set every four years and the main screens are often relegated to additional screens, in a room for example, where you do not necessarily have an antenna connection, nor want to place an additional decoder. This is why streaming keys are popular with users: they allow any screen to be connected. It is in this market dynamic that the new polaroid Smart Box S 4K, a dongle which is reminiscent of the new Chromecast with Google TV, except that he takes his brother Android TV on board. 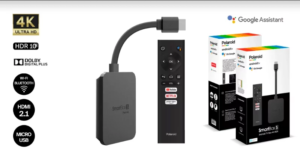 No, it is not a camera, but a streaming box, or more exactly a dongle, that Polaroid reveals to us. Decidedly keen to diversify, the brand is making a new foray into the connected television market with its Polaroid Smart Box S 4K, a compact streaming device running Android TV.

Compatible 4K HDR10 and certified Dolby Digital Plus, polaroid streaming stick Smart Box S embeds a processor Amlogic S905Y2 with 2 GB of RAM et 8 GB storage. Compact in size, it measures 8 cm long for 6.8 cm wide and display only 220 grams on the scale. Its Bluetooth remote has shortcut buttons for Prime Video, Netflix and YouTube, as well as a microphone button to invoke the Google Assistant.

Cdiscount.com €59,99 Fnac.com €69,99 Darty.com €69,99
TO READ :
Fire TV Cube test: the best streaming box for Alexa?
Tags Android TV Streaming Box Streaming key Polaroid Smart Box S
Alexien Modo March 4, 2021
Alexien Modo
More
Fascinated by Alexa since the day I received it in beta test, I gradually became passionate about the subject, before deciding to go further by creating a site with Jean-Christophe. An activity that allows me to quench my thirst for new technologies and share my discoveries about the nicest of communities: Les Alexiens.