As an avid reader of these columns, you have probably followed the new products Amazon Echo 2019. Like last year, a flood of products hit the ecosystem Alexa during the'Amazon Devices Event 2019. Although we still do not have a date for the arrival of the highly anticipated Echo Buds in France, several new products have nevertheless joined the ranks of the Echo range on Amazon. FrIncluding Echo Flex that we recently revealed to you, and of course Echo Studio which we will carry out an exhaustive test in the coming weeks. 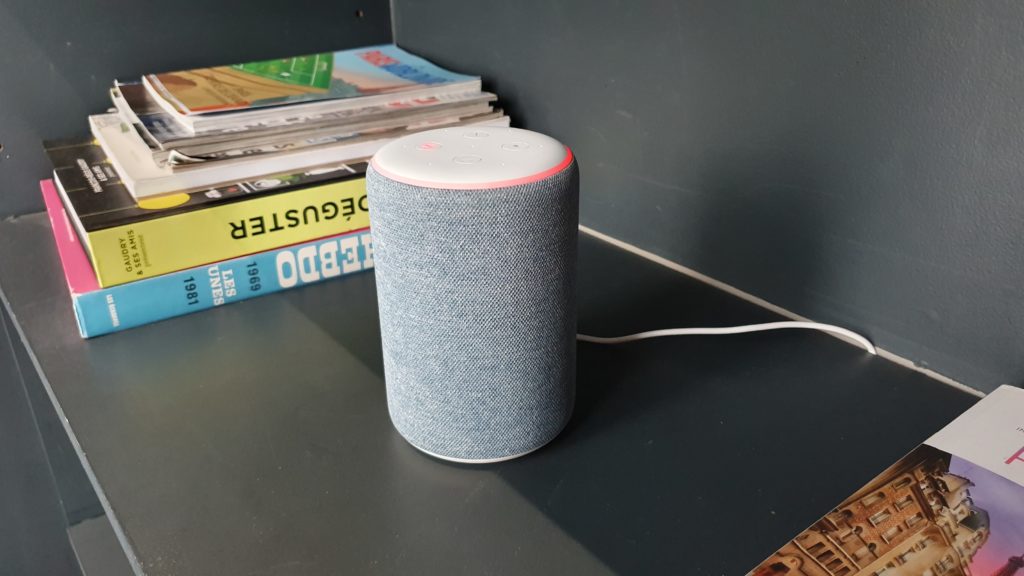 At the beginning of the month our editorial staff had the chance to be invited by Amazon to attend an exhaustive presentation of its new devices. If the latter was logically very focused on the release of the high-end speaker Echo Studio, a device that had not particularly caught our attention until then made a strong impression on us: Echo.

The new version of the iconic enclosure Alexa makes strong arguments. Offering sound qualities equivalent to those of the speaker 2nd generation Echo Plus released last year, the new Echo 3 appears to be a more than wise choice for many users, we will see why ...

Taking up the now famous codes of the range, the packaging strongly resembles those we had discovered on the arrival ofAlexa in France. The packaging has however gained in sobriety, only the logos Alexa and Echo now accompanying the visual of this new speaker nicely printed with a few touches of selective varnish. At first glance, the speaker strongly resembles its big sister Echo Plus.

Echo is now visually identical to Echo Plus. The Alexians

On the other faces, we find some marketing slogans, the logos of partner brands, sample commands Alexa, and of course the essential technical characteristics which allow us to immediately detect some major differences with the second generation.

Echo 3 is indeed equipped with a 20mm tweeter and a 76mm woofer  - against respectively 16 and 63 mm previously - accompanied by a 3.5 mm jack type auxiliary input / output - Echo 2 only offered a single output. Always labeled Dolby Audio, the emblematic speaker of the brand obviously offers Bluetooth connectivity and a system of seven microphones allowing Alexa to hear us at a long distance, provided you have not activated the button off which electronically cuts off the listening of the voice assistant of course. Differences which should logically affect the format of the speaker ...

Upon opening, we immediately notice the physical changes of this third generation. Echo 3 is 148mm tall, losing 3 mm compared to the previous version. A settlement which is accompanied by a slight overweight, the new version is now wider with a diameter of 99 mm (against 102 mm for Echo 2) and a waist circumference of 315 mm (280 mm previously). Surprisingly, however, it is lighter with 780 grams, or 41 g less. It is common with age, it is true, but everything suggests that the enclosure has improved especially over time ...

From a design point of view, this is already the case. The new Echo is much more beautiful and much more connected with Echo Dot 3 and Echo Plus. Moreover, the "Plus" of the latter now seems to be reduced to the ZigBee bridge and the temperature sensor it integrates, the audio part of the two speakers being strictly identical. In other words, the top of the range will now be represented by Echo Studio, and only the “connected home” part now differentiates the two models. Basically, we can only congratulate ourselves, we'll see why.

The mesh of the fabric covering the speaker is the same as on Echo Plus and EchoDot 3. As always, they do not suffer from the slightest defect, the finishes are excellent and the joint placed at the back barely visible. Pleasant both visually and to the touch, this third generation ofAmazon Echo is truly a success and the Seattle giant's speakers blend seamlessly into the most contemporary interiors.

Pleasant both visually and to the touch, this third generation ofAmazon Echo is really a success The Alexians

The upper part is rounded to the image of that of the small EchoDot 3. This slight curvature is really more harmonious and gives echo 3 an even more trendy style. We find there, as on the other speakers ofAmazon, two pairs of buttons. The first obviously allowsadjust volume and the second of electronically cut off listening toAlexa or, on the contrary, trigger the voice assistant without invoking it.

At the rear, there are two connectors: one 3.5 mm jack type audio input / output and power plug. A little more greedy than its predecessor, Echo 3 is now accompanied by a 30W block, the same as that of Echo Plus.

Under the device, two new elements appear: a no screws  - sometimes called Kodak because they are traditionally found on cameras - but also a six-pin power connector, said Pogo, allowing the Echo 3 to be placed on an external battery to get rid of the cables (note, this is only our conclusion, we are awaiting confirmation ofAmazon on this point, Editor's note). An excellent idea because, we see it regularly in our community, many users are looking for mobile devices. Strangely, Amazon does not offer such a device in its range of products, so we wonder about its intentions in this area in the future, but we find interesting the idea of ​​making an Echo nomadic in the absence of a device dedicated to use without wire.

Now let's see what the new Amazon Echo 3 has in the belly by examining its technical sheet ...

Unveiled to our amazed eyes on November 6, 2014, the star speaker ofAmazon has evolved a lot since then. If it retains its tubular appearance, it has lost a few centimeters since its very first version and from its second generation has been dressed in a fabric making it more warm and harmonious.

La third generationAmazon Echo does not shake up the codes of the range but gives the central speaker of the range a finish more in keeping with EchoDot 3, Echo Plus and Echo Studio. Now available in four finishes, it only loses the possibility of being dressed in a different case. An attractive option at first glance, but which does not seem to have met with the expected success with the clients of the Seattle firm. Some may regret it, but basically it doesn't change much ...

Taking exactly the same design as its predecessor Echo Plus, Echo 3 is a seductive speaker able to blend into any interior. Chez Les Alexiens love it! Its curves are harmonious and it goes wonderfully with the rest of the range. The finishes are exemplary and the upper part, plastic to the touch soft, is now more in harmony with the finish: white for the sand and blue / gray fabrics, black for the heather gray and anthracite versions. But this update is not just cosmetic ...

Indeed, and this is the most striking, Amazon Echo took from the trunk. The enclosure indeed offers a 76mm woofer and 20mm tweeter (against 63 mm and 16 mm previously) like Echo Plus. Positioned horizontally, the acoustic architecture of the enclosure allows for 360 ° sound dispersion. The Dolby effects are there, but again you'll need two speakers to enjoy stereo sound. The good news is that this Echo 3 can be paired with an Echo Plus! Those who have already opted for the latter will therefore be able to afford stereo at a lower cost. Excellent news.

The good news is that this Echo 3 can be paired with an Echo Plus! The Alexians

Regarding the overall sound quality, it seems to us largely up from Echo 2, even if one can regret a small lack of clarity in the mediums. It is once again particularly obvious on symphonic music, a style to say the least demanding, where the sound is sometimes a little messy and the bass and treble take over. Echo 3 is more comfortable on rock, folk and pop, a little less on jazz. Nevertheless, the application Alexa offering an equalizer, it is not difficult to balance the sound as you see fit.

Another downside, if the sound power is greater, there is always a certain harmonic distortion in high and low frequencies. It's a shame, but again not so surprising when it comes to a speaker marketed for a hundred euros. To get better, it will indeed easily be necessary to spend double, or even much more for the most music-loving ears, and if you are ready to consent, you will naturally turn to Echo Studio, which we will talk about very soon, or Hi-Fi equipment. much more bulky. Note, also, that Echo 3 benefiting from a line input / output, it is also possible to connect it to a more powerful sound system or to connect an external sound source to it. Practice !

At the application level, users ofAlexa will not be confused. We find all the familiar parameters, fromsound equalizer and Wi-Fi and Bluetooth settings, the possibility of assigning the 3.5 mm jack to entry or exit, but also to choose your favorite pregnant or to create a stereo speaker set and multi-room. It's complete, easy to configure, thank you Alexa !

It's complete, easy to configure, thank you Alexa !

In summary, this new iteration of Echo defends itself rather well by offering, at a more than reasonable price, honorable audio qualities. It is even surprising in view of the previous versions. Obviously, this is not the ultimate audio system, but is it reasonable to object to Amazon considering the price? Clearly, no, especially since the Echo range has also been enriched with a high fidelity speaker: Echo Studio. Finally, Amazon Echo 3 performs an interesting upgrade, the sound being richer, warmer and more powerful than before. In the end, this is a very good product to take advantage ofAlexa everywhere at home that will delight the ears of most of its users.
Amazon Echo (3rd generation), Connected speaker with Alexa, Gray blue fabric 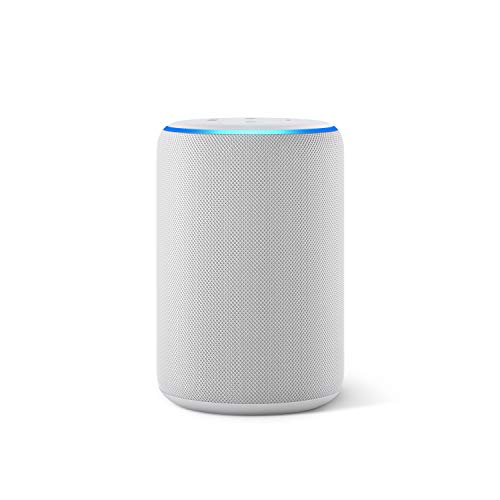 Available on Amazon. Fr
Tags 3th generation Alexa Echo Amazon Alexa Amazon Echo Amazon Echo 3 echo 3
Alexien Modo November 21, 2019
Alexien Modo
More
Fascinated by Alexa since the day I received it in beta test, I gradually became passionate about the subject, before deciding to go further by creating a site with Jean-Christophe. An activity that allows me to quench my thirst for new technologies and share my discoveries about the nicest of communities: Les Alexiens.