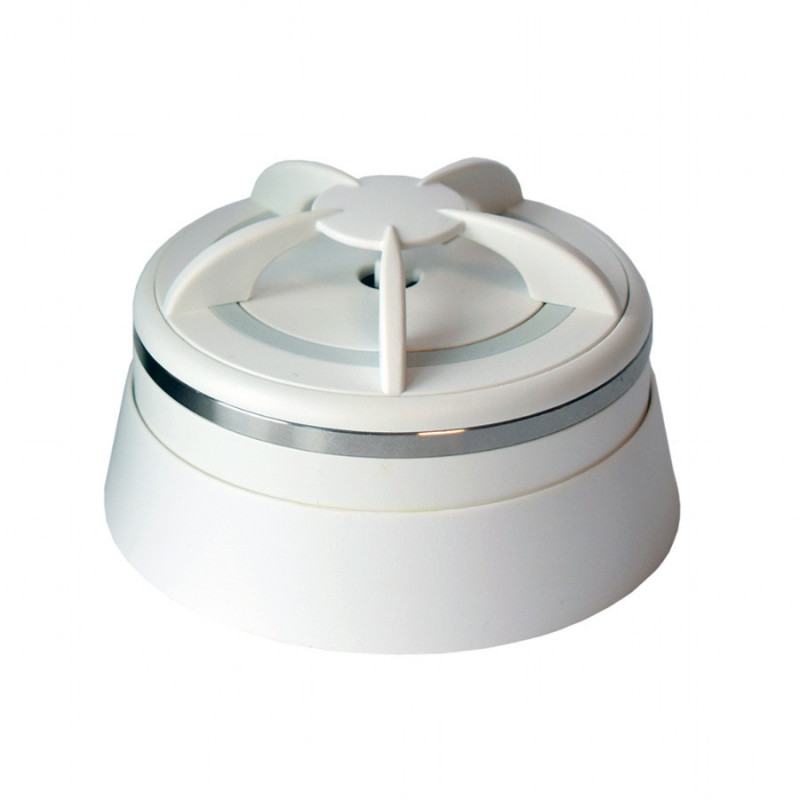 Domadoo.fr €38,00
Summary
Frient ZigBee Heat Detector: What is it? How it works ?
Features
Frient heat detector: installation and use in ZigBee

The smoke detectors are compulsory in the dwellings in order to alert in the event of a fire. Although useful, these small devices sometimes have the annoying tendency to take literally the expression " There's no smoke without fire ". They manage to beep if the dinner is burning or if you make a lot of steam in a room... Today we present to you its exact opposite: the connected heat detector.
Placed in a room, ceiling or walls, it will sound at 85 dB in the event of a fire, without worrying about smoke. operating in ZigBee 3.0 and sold around €38, do you need it?

Frient ZigBee Heat Detector: What is it? How it works ?

We no longer present to you Frient, consumer brand of Develco, a company of about fifteen people based in Århus in Denmark. As usual, we are entitled, again, to something sober and practical.

The packaging of the Frient heat detector logically very similar to that of Frient leak sensor that we recently presented to you, namely a green packaging with a visual. Simple but effective. You will find the sensor, accompanied by an installation guide in English and another multilingual (English serving as a reference with the diagrams), a hardware kit (2 screws and dowel) and a CR123A battery also provided.

The module is made of white plastic type ABS. No finishing problems were observed. It is solid and of good quality. It is exactly the same size as the Frient smoke detector with its 65 mm in diameter and 40 mm in height for a weight of 75 grams.

It consists of 3 parts:

« The alert will only be triggered if there is an increase in heat and therefore a fire.«

The internal LED (under the button reset) will take on a certain color code:

The operation of Frient heat detector sensor is quite "simple". It will constantly measure the temperature (it also acts as a room thermometer) and we alert when the temperature rises significantly in a short time compared to the average temperature or if it reaches a threshold value. Nothing to do with any presence of smoke. The alert will only be triggered if there is an increase in heat and therefore a fire.

Let's look at the specifications of the detector:

And that's not all, because it is also a temperature sensor.

In principle, the mode of operation and characteristics of the Frient heat detector are quite logical. The 85 dB is sufficient to be heard from anywhere in your home. Especially since it emits repetitive beeps, every second. The fact that it is also a room thermometer is a plus inherent in its operation, but is it really useful when you know that it should be placed on the ceiling or nearby?

It is also compatible Homey, Jeedom, HA… But for voice assistants, we will come back to this…

Frient heat detector: installation and use in ZigBee

The first step, regardless of the installation mode chosen, will be to put the detector in pairing mode. For this, as soon as you place the battery and it enters pairing mode for 15 seconds. If not, press for 10 seconds on the reset button. The LED will flash once, then twice in succession, and then many times in succession. When it does, stop pressing. It will then make a long flash and it's good.

For the installation, we tried with two Tuya gateways / Smart Life (Wireless Mini-Hub and Earthsmart ZMHK-01), but it doesn't work. You can try with other third-party gateways, but we do not guarantee possible compatibility. We then tried with Hubs Alexa (Echo Show 10 et iero Pro 6) with no more success. The module is therefore not usable with Tuya hubs and live voice assistants.

So there is only Home Assistant, Jeedom or Homey left. So we went through the box Jeedom atlas. For the other boxes, we refer you to the associated operating modes. We also refer you to our tutorial to find out how to install a ZigBee device and have it recognized by Alexa.

TO READ :
Tutorial: add a ZigBee device on Jeedom

If you are not yet used to the system, be aware that it is necessary to have the ZigBee Plug-In, paid for, in order to bring the sensor up in your Jeedom ecosystem. To bring it up under Alexa, for this you need the Plug-in Alexa and the appropriate subscription. Ditto to use it with Google Assistant, you need the Plug-in Google Smart Home. But in this case, it's not really necessary because the module is not recognized as such by the wizards. This is a problem that does not come from the device, but fromAlexa or GA which do not support a large number of detectors and sensors at present. We will come back to it soon.

Once found, the Frient heat detector goes back as such. Choose the room where it will be, give it a name and make it visible to make it appear on your dashboard. You can enter commands if you want, but there's no real need.

Once done, under your Dashboard you can see heat detection and temperature (with graph if you wish).

As announced earlier, the heat detector will not be supported by Alexa, but you will still find the thermometer. Unfortunately, it will not be usable in routines… Not too much interest then. And under Google Home, you have the sensor, but it is totally unusable.

« the heat detector will not be supported by Alexa«

If you want to be informed in the event of a fire, you will therefore have to a scenario via Jeedom. Give it a name, a group if you wish (in our case, we created the alarm group), make it "active" and choose the trigger. Triggering will be a provoked mode in this case. Select the equipment it will be talking about (parent object, part and your module) and it will trigger when a stimulus occurs.

In the scenario part, select this trigger. We left on a model IF THEN. Si the heat detector takes the value "1" (note = 1 at the end), then a Pop-up window with a message that you have created will open on all devices using Jeedom. You choose the mode of action to apply from a list. It is also possible to have an SMS sent to you. But for that, in addition to the SMS plug-in, you also need a 3G key attached to your Jeedom.

Once done, you'll get a Pop-Up or SMS telling you that something is happening. You can also play with the sensor logo for another visual alert. You also have the instantaneous temperature that will change.

Indeed, we could criticize our sensor for not working simply with voice assistants, but a minimum of time is enough to create fairly cool scenarios to highlight an abnormal event. We leave it to you to play with Jeedom, Homey or Home Assistant to find your happiness.

We have tested the behavior of the Frient ZigBee heat detector and two things appear:

FRIENT - Zigbee 3.0 Smart Heat Detector
€38,00
Buy
Domadoo.fr
What to say in conclusion of this test of the Frient heat detector?

Operating in ZigBee 3.0, this sensor differs from smoke detectors in that it will not rely on the presence of smoke to issue an alarm but on an increase in ambient temperature. A smoke detector may go off because of a dish that burns in the oven or too much steam (mistaken for smoke). This is why heat detectors are intended more precise in raising the alert. Quite compact, the module will be placed on the ceiling or on a wall and will communicate with your box Jeedom, Homey or HA Indeed, it is not recognized by ZigBee Tuya gateways /Smart Life or Alexa. It will also not come up as a detector on voice assistants since they do not yet support this type of sensor. However, you will find it on Alexa as a thermometer (because it is also a temperature sensor, which is not illogical) via Jeedom, although it cannot be integrated into routines.

In addition to a visual alert in the event of abnormal heat detection (temperature monitoring and symbol), it is possible to make scenarios on a home automation program to have notifications or receive text messages (by means of a GSM key) informing you of a potential fire. This detector will therefore delight aficionados of home automation boxes due to the multitude of possible scenarios, but will still frustrate users of easier-to-access solutions. However, used even when not connected, it is quite useful and remains an excellent complement to the smoke detector.

View
Tags fire detector Heat detector Frient Frient Intelligent Heat Alarm Zigbee
Jean-Christophe May 9th
Jean-Christophe
More
Did i choose Alexa or did she choose me? Let's say that as a beta tester, it's a bit of both! And I do not regret having met our favorite assistant nor this adventure undertaken with Alexien Modo. Technophile, self-taught and loving popularization, I try to make our common passion easy to access!