At Aqara, innovation is the watchword and the product we are presenting to you today is proof of this. Surprisingly, it has no real equivalent and is called Aqara Cube. Yes, it is neither more nor less than a perfectly regular hexahedron… And connected of course! But what the hell can be used for? This is what we will see.

La Aqara brand belongs to society Lumi United Technology Co. Ltd and not to the famous Xiaomi. Although they collaborate closely, it is the first that manufactures many connected objects for the second and not the other way around. If Xiaomi helped it in its early days, this independent company based in Shenzhen now has nearly 300 showrooms in its name and employs more than 200 people in its R&D teams. Let us give back to Caesar what belongs to Caesar!
New Version of Aqara Cube Controller Zigbee Controlled by Six Actions with ... 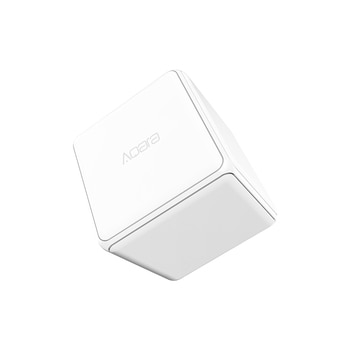 Presented in the now famous white packaging of the brand, always as simple as it is elegant, the little Aqara Cube surprises with its cubic shape. We must admit that this format is surprising to say the least and leaves a little doubtful about its function at first glance.

A function nevertheless largely explained on the other sides of the packaging which indeed teach us that we can push it, rotate it 90 ° or 180 °, shake it, turn it or even tap it. It is noted, but that does not tell us much in the end, does it?

Fortunately, the last side explains that, in addition to its two-year autonomy, the Aqara cube is a smart accessory used for control other devices with the six actions listed above and that it will allow us in particular to shake it to turn on or off all the lights! Our imaginations overflowing with home automation ideas are already boiling, it is high time to take a closer look at this gadget.

At the opening, let's not discover a square-faced prism whose edges measure only 4,5 cm long. It is therefore a very compact cube. Accompanied by a multilingual notice and the traditional flyer in the brand's color, it comes with a small tool to open it.

Devoid of pimples or other appendages, Aqara Cube is perfectly smooth and quite intriguing. Its matte plastic plastic faces and edges with a shiny finish make it a small object that is at the same time fun, elegant and truly original. Its small size allows us to hold it perfectly in our hands and the desire to play with it does not take long to be felt, but let's start by opening it.

“Devoid of any pimples or other appendages, it's perfectly smooth and quite intriguing. " The Alexians

Thanks to a small metal tab, we can easily remove one of its faces. This contains a 2450V CR3 battery and presents a whole small LED and a button "Link". Its CE marking reassures us that it complies with the regulations in force in the European Union.

There you have it, that's about all we can say about this intriguing object ... Let's move on to the installation to discover more after our traditional detour through its technical sheet.

Like all of the brand's connected objects, Aqara's cube connects in ZigBee to its bridge. We are going to use the Aqara Europe gateway with the Xiaomi Home application until we can use the home version called Aqara Home in Europe, which should soon be available.

An always so simple installation

As we have just noted, the pretty Aqara Cube contains a button Link which will allow it to be associated with its gateway and a LED as indicator of good execution. But, before pressing it, let's open the app.

Just press the "+" then select "Aqara Cube" in the lognue list of connected objects of the Xiaomi universe. Finally, it is advisable topress more than 5 seconds on the famous association button.

An association that takes place in about 20 seconds and whose proper execution is confirmed by the traditional phrase "Device connected" from the gateway. It only remains for us assign a room and a name.

There it's done ! We can now control many devices with our brand new Aqara Cube.

By pressing on the thumbnail representing the cube, we fall as usual on the event log recorded by the device.

The button " automating " will allow us to configure the six possible movements. If control lighting likeAqara LED Light Bulb ou Yeelight color seems to go without saying, know that you can also associate it with your Roborock robot vacuum cleaners (start, pause, stop) or even trigger actions on the gateway Aqara (activate / deactivate monitoring, switch on / off the night light, trigger the siren, etc.).

As far as we are concerned, we have chosen to use the cube as a remote control and to assign each of the six movements an action. After many tests, it is this configuration that we find the most practical for a connected bulb of the “White” type, but you are free to program it as you see fit.

How does it work?

It's very simple, Aqara simply placed a gyro sensor inside his little cube. It is he who is able to interpret the movements we make and execute the actions defined in the application.

Our opinion on the Aqara Cube

A little dubious at first, this UFO of connected objects finally fully charmed us. Why? Because it is more than original already, but also because it is more than practical once well taken in hand. It takes a bit of getting used to, but if you think about its programming well in advance, its use quickly becomes very natural. In addition, it will not fail to amaze your loved ones as well as your visitors because it is so original. Discreet and compact, it blends in with any interior and turns out to be more aesthetic than a classic remote control. Finally, its excellent reactivity surprises and its low price makes you want to put it everywhere in the house. Sold around € 15 on Amazon.fr and on many Chinese platforms, the surprising Aqara Cube is a frankly original connected object that we invite to try.
New Version of Aqara Cube Controller Zigbee Controlled by Six Actions with ...

Available on Aliexpress
Available on Amazon. Fr
Tags Aqara Aqara Cube Aqara Home Connected gadget Connected object ZigBee remote control Xiaomi Home
Alexien Modo April 23th
Alexien Modo
More
Fascinated by Alexa since the day I received it in beta test, I gradually became passionate about the subject, before deciding to go further by creating a site with Jean-Christophe. An activity that allows me to quench my thirst for new technologies and share my discoveries about the nicest of communities: Les Alexiens.