It's been some time since the Alexians offered you a connected sockets test. It must be said that we are a bit difficult in our choices! What can we get you as a plug at an affordable price but with features that set them apart from the rest? Well ... here is the Maxcio YX-DE02-F connected socket, a multi-tasking socket making at the same time socket (which is good), double USB plug and night light! And that for not even 20 €.

The Maxcio socket, made in China and placed on the European market via the Netherlands, is of type E, therefore French, with an earth pin perfectly suited to our sockets. It is delivered in a fairly good quality cardboard box, thick and relatively well illustrated that we generally find for top-of-the-range products… Which leads us to think of a very good quality product. But do not let ourselves be influenced ...

The grip as such is quite aesthetic with its rounded shape but its finish may seem a little basic, with somewhat coarse details (for example the area from which the light will be emitted which is not very well molded). You will also find a quick installation guide in French, very complete and very well done (even if French is sometimes a bit risky).

What is welcome is the fact of not having a cobblestone-shaped grip, very unattractive and lacking in originality, which only deserves to be hidden. We are not using very thick plastic, but a fairly satisfactory quality despite everything. She has a weight of 140 g, which puts it in the market average. She also has a physical button on the top and small LED on the front high, of course, allowing the status of the outlet to be given (on and off).

But that's not all ! It has 2 USB plugs on its lower part et a light diffusing through a smile-shaped opening on its lower front face. And that… That's good! It's a change from the ordinary and it's nice!

Its size is medium: 8 cm high, 7 cm wide and a thickness when connected of 4,5 cm approximately. So not the smallest but not the biggest either. Regarding its characteristics, it is average: 100-240V, 50/60 Hz and an intensity of 10A max (more than 2000 W). The two USB plugs are 5V, 2.1A max, therefore adapted to a smartphone and most devices using this type of plug. The LED when it is colored RGB and white. Regarding Wi-Fi, no surprise, network in 2.4 GHz only, IEEE802.11b/g/n.

To make his socket work, Maxcio, like many, decided to use SmartLife, the Swiss Army knife of applications for connected devices. So no difficulty installing and configuring it. And of course, the routines and scenes functions are available.

And where things get interesting is that once installed, the plug will actually triple and each entity can be managed individually :

Be careful, for the socket to work perfectly with Alexa, do not let it be detected automatically. If this has already been done, it is necessary to remove it from the application Alexa to redo the detection. This will be seen because the plug will appear in the form of an envelope and not the plug symbol… To do this without any problem, press + in the connected house part, then add a new device and choose Tuya then plug. Let it go and you will see not only the socket but also the LED appear as a light ...

This multi-tasking socket is really interesting on several aspects: the LED allowing it to be used as a night light or as a mood light (but also to turn it off) and its triple connection: two USB and a female plug. And all control individually (USB work with the female plug). And really, for the price, it's a nice surprise! 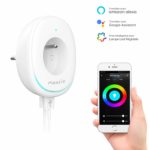 Available on Amazon. Fr
Tags Alexa Amazon Alexa Amazon Echo maxcio Connected socket
Jean-Christophe January 12 2019
Jean-Christophe
See more
Did i choose Alexa or did she choose me? Let's say that as a beta tester, it's a bit of both! And I do not regret having met our favorite assistant nor this adventure undertaken with Alexien Modo. Technophile, self-taught and loving popularization, I try to make our common passion easy to access!